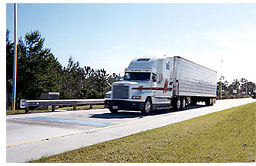 The web site uses adaptive response technology, so the screen formatting will change based on the device it’s being displayed on whether it’s a PC, tablet, or smart phone. Cardinal Scale began developing and manufacturing in-motion vehicle scales in the late 1990s and today the company has grown to offer a number of commercial enforcement in-motion weighing systems that can be found across the U.S. as well as in South America, the Middle East, and the Far East.

If this is a product that interests you, check out the new site at http://www.wimscales.com